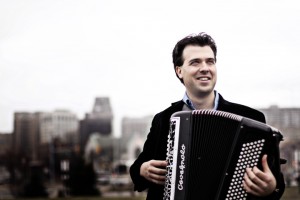 The sheng is in fact the first known instrument to use the free vibrating reed principle, which is the basis of the accordion’s sound production. Virtually unchanged after centuries of use, the sheng attracted the attention of European musicians and craftsmen after being taken to Russia around the year 1770. Cyrillus Damian, a Viennese instrument maker, has often been credited with the creation of the first true accordion. He was, in fact, the first to patent an instrument of that name, having received royal patronage for his invention in 1829 but the first true accordion made its appearance in 1822, when a German instrument maker named Christian Friedrich Buschmann (1775-1832) put some expanding bellows onto a small portable keyboard, with free vibrating reeds inside the instrument itself. The chromatic accordion, which produced the same note on the press and the draw of the bellows, came into use in 1850 when an accordionist named Walter requested that one be custom-built for him. The chromatic keyboard has more than one system. It can have anywhere between three and six rows of small round (and sometimes rectangular) keys. The fourth, fifth and sixth rows are repeats of the first three rows, to increase fingering possibilities. See sample. 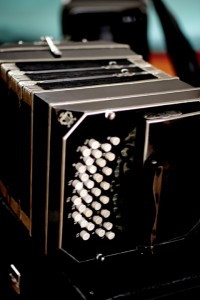 The bandoneón was developed by Heinrich Band in the 1840’s. Although invented in Germany, it quickly made its way to Argentina and became synonymous with the Argentine tango. With the appearance of a square accordion, the bandoneón is actually closer to the concertina. Each end of the bandoneón is a square wooden box containing a small reed organ operated by several rows of buttons. These boxes are connected by a folding bellows. Expanding and contracting the bellows provides air to the reed organs producing the sounds, and depressing the buttons directs air to the appropriate reed. The right side is a descant reed organ for playing the melody notes and the left side is a bass reed organ for playing bass notes. The descant side also has a thumb lever that disengages the reed organ, so the bellows can expand or contract without sounding any notes. See sample. 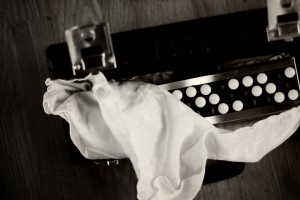 The accordina was invented in France in the early 1940s by Andre Borel. The instrument borrows features like the free reeds and the right hand chromatic keyboard from the French style accordion. The sound is produced by an air stream that passes over the reeds and causes them to vibrate as for a harmonica. Two mobile flaps on each side simulate the harmonica player’s hands. See sample.